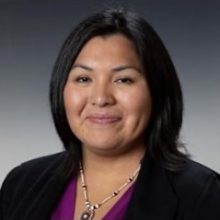 Tanya Kaquatosh is the Senior Vice President of Administration for Doyon, Limited.  Kaquatosh is Koyukon Athabascan and Inupiaq Eskimo from the village of Hughes.  Kaquatosh has worked for the Doyon Family of Companies since 2008 and was most recently the Director of Regulatory affairs at Doyon Utilities. Kaquatosh has served on numerous boards to include Greater Fairbanks Chamber of Commerce and Catholic Schools of Fairbanks Boards. She holds a Bachelor of Arts degree in Economics from Stanford University and a Master degree in Business Administration from Arizona State University. She is also a graduate of the 2014 Doyon Leadership Training program.